Here is my hypothesis for why frequency, along with biomass, is a key factor in this system:

My example system is potatoes following mustard green manure crops, but the same idea may be effective in other systems. You can read a case study of a farmer in this system published in June 2017. 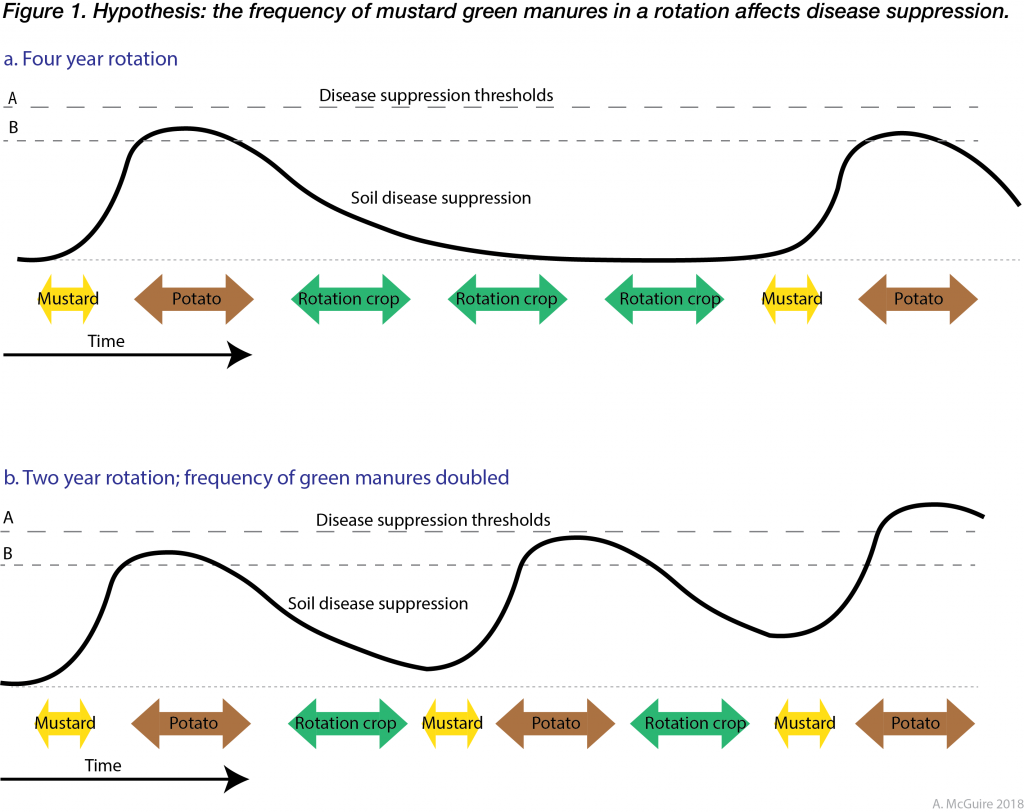 A mustard green manure, when incorporated, increases the soil’s ability to suppress a pest. Here the pest is the disease/nematode complex “potato early dying.” However, the suppression effect is not permanent; it increases to a certain level but after time decreases as the green manure effects on the soil fade.

The pest pressure in the field is also important, shown here as A or B. If the pest suppression ability, related directly to green manure biomass and perhaps incorporation methods, rises above the disease level, then we see suppression, but if not, no suppression even though we have changed the soil. So higher pest pressures may mask the changes of one green manure crop.

In a 4-year rotation (Figure 1a), where green manures are only used before potatoes, the level of pest suppression may fade to pre-green manure levels after 2+ years without a green manures. In this case, the second green manure crop gives results similar to the first crop. There would be no cumulative effect.

A good hypothesis can explain observations. When I first had this idea about cumulative effects, I liked it because it would account for the results I have seen in the field. Those using their first green manure crop generally do not see much pest suppression, although they still improve their soils. Even those who persevered in using mustard green manures did not find the success we were measuring at the Gies farm (McGuire 2003). The difference? At the time of our first testing of the Gies fields, the soils had received the benefit of 3-4 green manure crops, each separated by just one year of potatoes. All the other growers were using at least a 3-yr rotation and sometimes longer. These counterintuitive benefits we see in a shorter crop rotation could be explained if the pest suppression ability of the soil is cumulative when green manures are grown more often.

There are some potential problems with doing this on farms. Pests that are not affected by the green manure may get worse in a short rotation; however, this was not evident on the Gies farm fields. Also, potato processors stipulate the length of the crop rotation in their contracts with potato farmers. They would have to be convinced of the benefits of shorter rotations with green manures before they will change this.

However, there are also some potential benefits. Growing potatoes more often should increase profits if yield and quality can be maintained. Farmers doing this could concentrate potato production on their best fields, leaving other less productive fields to less-valuable crops. Eventually, as pest suppression in the soil builds, fumigation could be eliminated which would also increase profits. In addition to profits, the soil under the shorter rotations should improve as we saw in the Gies fields.

So, what’s next? Testing this hypothesis through on-farm research is feasible with support from farmers and processors – the field setup and work required is not difficult. It would, however, take a long-term effort to see how many green manure crops it takes to increase pest suppression on fields with different soil types and crop history. Check back with me in 10 years.