Skip to main content Skip to navigation
Inspired solutions for the future of agriculture and the environment.
Learn More Program Areas
Posted by Karen Hills | November 30, 2021

Soil has been called “the living skin of the Earth.” The effort to maintain the health of this “living skin” in Washington got a boost in 2021 when the State Legislature passed the Washington Soil Health Initiative with a $2.1 million annual allocation (half of which goes to Washington State University). Washington State is just one of many states in the U.S. where interest in soil health has resulted in initiatives focused on maintaining soil health on working lands, but, notably, no other state’s soil health initiative is investing as much into research as Washington’s. Soil health is defined by the USDA NRCS as “…the continued capacity of soil to function as a vital living ecosystem that sustains plants, animals, and humans.” Soil health is often described as a “win-win” with positive outcomes both on-farm and off-farm. For example, on-farm benefits include improved soil tilth, nutrient cycling, water holding capacity, and disease suppression. Off-farm benefits include reduced soil erosion and improved water quality, as well as reducing the impact on our climate, most directly through carbon sequestration. 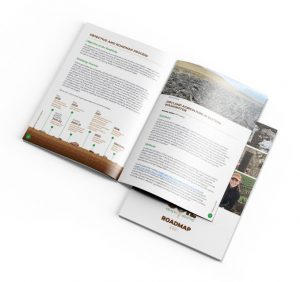 Two years ago, we began a process to understand the current issues of soil health and the barriers to adoption of soil health promoting practices, and to identify goals and milestones for maintaining and improving soil health across the state. In a state like Washington, with its more than 300 commodity and specialty crops spanning multiple climate regimes and soil types, this is no small feat. Twenty three individuals directly contributed to the process which involved collecting information from many additional representatives of seven different agricultural production systems (dryland Eastern Washington, tree fruit, wine and juice grapes, irrigated Columbia Basin, Columbia Basin potato, diversified Western Washington, and Northwestern Washington annual cropping systems) as well as from members of the environmental community with an interest in soil health.

So, what does the roadmap mean for Washington’s efforts to maintain and improve soil health? It provides valuable guidance for forward movement on soil health in many of Washington’s most economically impactful cropping systems, as well as an important snapshot of priorities and challenges specific to particular areas of focus.

If you are interested in a specific production system, we encourage you to delve into the relevant chapter of the report, but here are some distillations that span across these systems (called focus areas in the report):

“Across focus areas there was a common emphasis on the need for production system-specific research, outreach and technical support, optimization of soil health metrics, and incentive programs.”

This report is expected to provide insight and guidance for a number of efforts underway. Washington State University is currently evaluating requests for funding to set up additional Long Term Agricultural Research and Extension sites within the state, which will support the needed research, outreach and technical support. Statewide programs such as the recently funded Sustainable Farms and Fields Program can then provide incentives that give landowners increased options to undertake soil health improving practices. Stay tuned for more on these programs as Washington’s efforts ramp up.

This article is also posted on AgClimate.net.